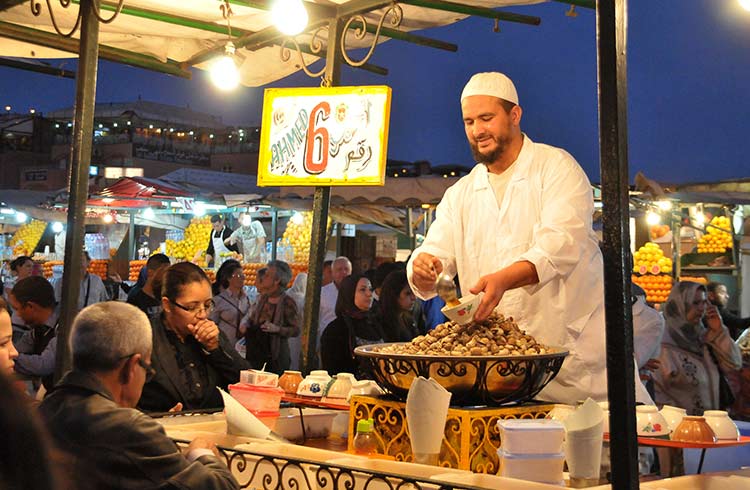 Holiday Morocco is a predominantly Islamic country, with both Arabs and Berbers calling the nation home. So, each ethnic group has played a part in shaping Morocco’s cuisine via traditional recipes, methods of cooking, and ingredients.

There have been other influences on Morocco’s gastronomy too, helping to create the dishes that the country is known for today. Andalusian Muslims and Moroccan Jews had an influence on culinary traditions in the past. Colonial powers, such as France, Spain, and Portugal, introduced new ideas too. Diverse immigrants and traders brought new ingredients and techniques to the country, and there had been influences from nearby nations in both Africa and Europe. The typical Moroccan kitchen today is naked without a good selection of spices, at least one tagine pot, a rolling pin, and an oven.

Here are some of the topmost traditional Moroccan dishes to sink your teeth into on a trip around this North African country. 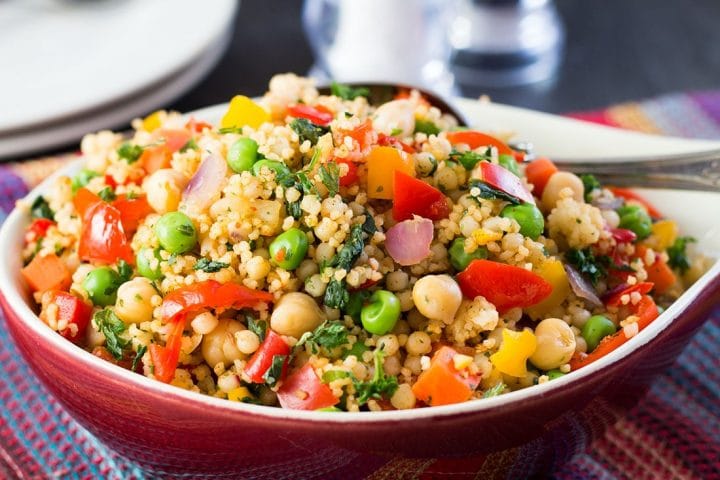 Mainly a traditional North African dish with Berber roots, couscous is often eaten in Morocco on Fridays. Indeed, you may find that it’s not available in many restaurants on other days of the week. The small balls are made from soft wheat or barley flour and steamed in a special pot. It is served with various meats and vegetables. The most famous Moroccan couscous is seven-vegetable couscous. As the name suggests, the dish has seven different types of vegetables, though it also contains meat as well.

Bishara is basically an especially popular dish in the northern and eastern regions of Morocco. A thick, hearty, and comforting soup, it is typically eaten as a filling breakfast. Made from fava beans, it is seasoned with salt, cumin, and chili.

Another iconic dish from Morocco, the Moroccan tagine is different from dishes called tagine from other North African countries. Cooked in a clay pot, which is also called a tagine, the dish can contain an assortment of vegetables, meat, poultry, and seafood.  The dish mainly takes its name from the pot it is cooked in and the method of cooking as opposed to from the actual ingredients and recipes. One of the most popular tagines contains chicken and lemon. The dish always takes a fairly long time to cook, traditionally over coals, and the addition of herbs, spices, dried fruit, and olive oil makes it even more flavourful. Tagine is usually served with chunks of Moroccan bread, with the bread used to scoop up ingredients and sauce. 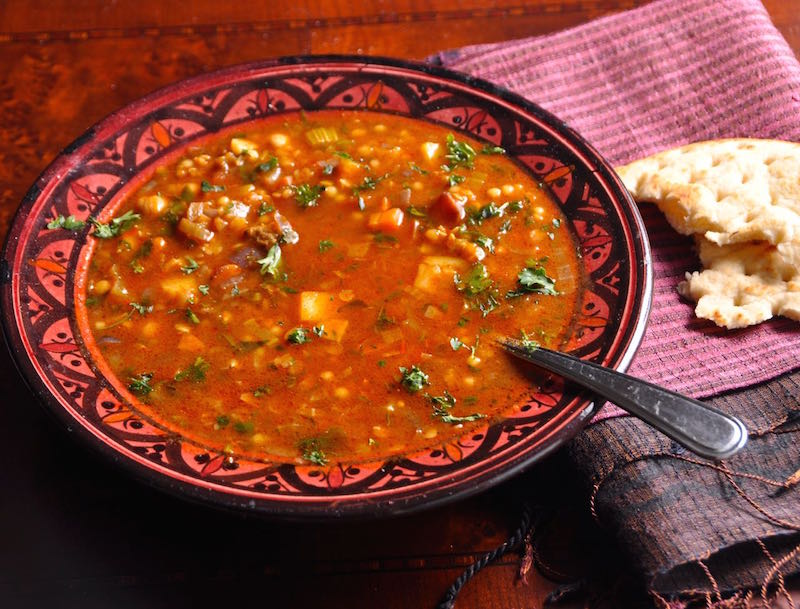 Harira is also another Moroccan soup that is filling and delicious. The main ingredients are chickpeas and lentils, with tomatoes and seasonings as a base. Other vegetables, such as onion and celery, may be added, and some people like to also include small pieces of chicken or lamb for extra protein and flavor. Each family may have a slightly different way of preparing the soup, so don’t be surprised if no two bowls taste the same. Some people like to boil and blend the ingredients so that the soup is quite smooth, whereas others like the texture when the chickpeas and lentils are still distinguishable. It is commonly eaten during Ramadan and the cooler winter months.

Tangia is a local dish from Marrakech. The meal takes its name from the type of urn-like pot that it is cooked in. It is historically linked with souk vendors, as sellers would often prepare a pot to take on a picnic on their day off. The pot is stuffed with meat, lemon, salted butter, garlic, and spices, before being slow-cooked in coals. Traditionally, people would take their tangia to the local hammam and leave it to cook in the embers that heated the water.

R’fissa is mainly a traditional Moroccan dish with Arabic roots. It is a type of stew made from lentils, chicken, fenugreek seeds, and mixed spices. The stew is served on top of a bed of shredded crepes. It is full of flavor and has an interesting texture. It’s especially popular in the winter months and at celebrations. It’s common for people to eat the stew from one large communal dish.

Simple yet flavourful, Moroccan salad is made with just a few key ingredients — tomato, pepper, and onion, all chopped into fine pieces, flavored with cumin and coriander, and drizzled with a splash of olive oil.

A common item at wedding feasts and large celebrations, mechoui is a whole lamb that is slow-cooked over coals in a fire pit. It takes on a smoky taste from the coals and is cooked until the meat is tender and almost falling right off the bone. So, the melt-in-mouth meat is seasoned with a pinch of salt and cumin.

Another meaty favorite, brochettes are essentially meat skewers; the dish takes its name from the French word for the skewer. Chunks of lamb, liver, lamb sausage, chicken, or fish are speared and grilled, commonly served still on the sticks. Brochettes typically come with a range of sides, which may include olives, grilled tomatoes and peppers, fries, and rice.

With a coastline stretching along both the Atlantic Ocean and the Mediterranean Sea, it’s little surprise to find that fish and seafood are common in Morocco. Morocco is one of the world’s largest producers of sardines, and the small fish are enjoyed locally too. More common, naturally, by the coast, Essaouira and Safi are key places for enjoying tasty sardines. Tuck into a plate of grilled sardines with gusto.

These 10 dishes are just are few of the mouth-watering meals you’ll encounter in luxury private tours in Morocco. There are always many types of delicious bread, something of a staple in Morocco, and an abundance of sweet treats. And, there’s no shortage of sweet mint tea to wash everything down by choosing Imperial city tours.

Can we say Morocco is the paradise of foodies?

What you need to know before visiting the Sahara desert?

Marrakech vs Casablanca- which do you prefer?